(Yeah I know I said my next review was going to be The Video Dead but life got in the way of that. Sue me. It's still going to come out I'm just putting it on the backburner.) 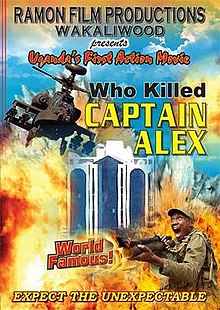 Not only does the titular question never get answered but the writer/director doesn't even know who killed Captain Alex.


Plot synopsis (taken from IMDB):  The brother of Richard (leader of the Tiger Mafia ) is killed in a shootout, prompting a revenge attack on the army camp. But when troop leader Captain Alex is killed during a raid, a violent war escalates between the two sides. The captain's brother takes matters into his own hands, while mafia henchmen take to the skies to bomb Kampala. Narrated with energy and wit by 'Video Joker' Emmie, ultra-low budget thriller Who Killed Captain Alex became an international viral sensation when its trailer first hit YouTube. Self-taught film-maker Nabwana Isaac Godfrey Geoffrey produced, directed, shot, wrote and edited the film from his home in the slums of Uganda (a.k.a 'Wakaliwood') for under $200.

Who Killed Captain Alex? is objectively speaking the greatest film ever made. That's right, it's better than Citizen Kane, better than Taxi Driver, better than Godzilla vs. Gigan and all those other films widely regarded as the cream of the crop when it comes to cinema. If Black Panther was made by Wakaliwood Studios it would have actually deserved the best picture nomination. You think I'm exaggerating for comedic effect? Tell me, did any of those movies have a Video Joker cracking jokes about eating German tourists and screaming about how the movie is on? What do you mean you don't know what a Video Joker is?


In Ugandan cinema halls, a Video Joker or "VJ" is someone who talks over Western language films via a mike to ostensibly narrate what's going on. But really they just talk shit the whole time and occasionally point out key plot points. At least that's what VJ Emmie does. All jokes aside, Who Killed Captain Alex? is interesting in that it straddles the line between genuinely being so bad it's good and being intentionally silly. 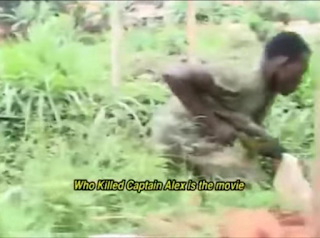 Thanks Emmie, I thought I was watching Star Wars this whole time.

On the one hand the actors in the film play it completely straight and on the other hand Nabwana Isaac Godfrey Geoffrey (try saying that 3 times fast) makes sure his movies come with their own riffing. I've been talking about VJ Emmie a lot because he honestly steals the show. At first I thought he was annoying but then he started to grow on me. Emmie's rapid fire non sequitur filled commentary has most of the films' funniest lines and spawned almost all the memes associated with Wakaliwood. But I've been talking about VJ Emmie for too long so let's move on to other things. 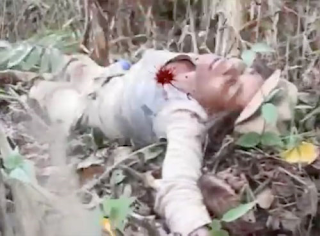 I know, I thought Industrial Light and Magic did the effects at first too.


Calling the characters paper thin would be an insult to paper. Only two characters (Richard and Captain Alex) are named at all during the actual film. Shit, the main character doesn't even get a name until the end credits. Who Killed Captain Alex? has less plot and characterization than the average episode of He-Man and The Masters of the Universe. Everything is just a set up for the next batshit insane action scene. The action here though is extremely impressive given the budget was lower than that of the average Asylum flick and it was filmed in the slums of a third world country. The effects are fucking awful and the acting is over the top (From what I can tell. I mean, it's not in English) but these were amateurs trying to make the most out of the situation they were in. 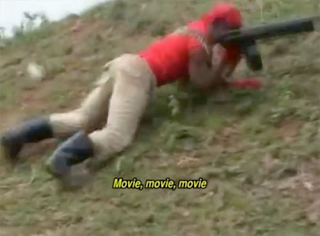 More insightful commentary from VJ Emmie.
.
I've been avoiding spoiling too much of the movie for 3 reasons. 1: It's an hour long flick you can watch on YouTube for free, 2: there's barely any plot to spoil anyway and 3: I consider this film highly entertaining and I give it my highest recommendation. There's never a dull moment to be had and underneath all the high octane fight scenes, crappy CGI explosions and narrators screaming about dinosaurs is a lot of heart. If I'm going to be honest, this movie is kind of inspiring to me. Isaac Nabwana Godfrey Geoffrey not only managed to make a movie in a part of the world prone to floods, power outages and having no running water but managed to kickstart an entire film industry. Who Killed Captain Alex? might be a ridiculous low quality piece of shit it's a ridiculous low quality piece of shit with passion, soul and most importantly riffiablity. If you like bad movies or just genre films in general you need to give this flick a watch.

But don't take my word for it, watch it for yourself!

Posted by austinpopdan at 9:14 PM