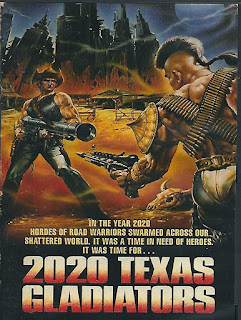 What better time to do a new year's tie-in review than near the end of February? Happy new year, I guess. Also this poster seriously had the balls to put the words "road warrior" on it? Come on!

Plot synopsis (taken from IMDB): "In a post-apocalyptic Texas, a band of warriors fight against a fascist regime that is trying to take control of all surviving population. "


Man, Italy sure fucking loved Mad Max during the eighties. Between 1990: The Bronx Warriors, Warriors of the Wasteland, Interzone, Raiders of Atlantis, Exterminators of the Year 3000, Warrior of the Lost World and today's feature you could argue that shitty Mad Max knock-offs were a genre in of themselves. Speaking of today's feature, 2020 Texas Gladiators was brought to us by the dynamic duo of and Joe D'Amato and George Eastman. Joe D'Amato was the director of such classics as Porno Holocaust, Zombie 5: Killing Birds, the second Troll 3, and Papaya, Love Godess of the Cannibals. George Eastman was the guy who played a a fetus eating monster in D'Amato's film Anthropophagus.
The esteemed fetus chewer not only co-directed the film but also wrote it and had a supporting role in it. 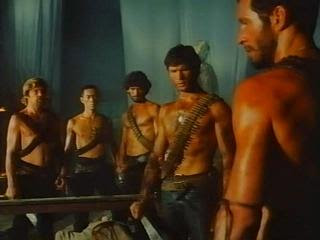 The Village People protagonists of our film. No I can't tell them apart either.

That's pretty much all the info I could gather on this flick so let's just jump straight into the review. I'll get this out of the way first: I thought this movie was boring as all hell. You wanna know why this review took so long to write (outside of my ADHD and procrastination problems). Because I honestly had trouble coming up with anything to say about this movie. This movie is completely lacking in originality or creativity. Almost every cliché of 80's post apocalyptic films is in here.  An offscreen nuclear war? Check! A fascist regime who wants to take over for the fallen government? Check! It's Mad Max rip-off 101. 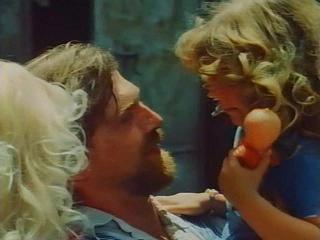 The first 20 minutes of this movie focus on this guy. He's unceremoniously killed off and then hardly ever brought up for the rest of it.


It'd be 1 thing if this movie was an unoriginal knock off that was really entertaining but alas that's not the case. There's not a whole lot of the gore, nudity and batshit insanity you and I want from exploitation films.  A movie called 2020 Texas Gladiators that has no gladiators and was shot in Italy shouldn't take itself so seriously.  This film has a lot of elements that should push it into so bad it's good territory: oiled up beefcakes with bad perms and poorly dubbed voices, native americans played by Italians in dollar store wigs and dodgy face paint, characters named "Catch Dog" and "Nisus" and action scene after action scene. Unfortunately the only part of this movie that I found really entertaining was the opening scene. Let me tell you: I was really excited to watch this movie when it opened up with dudes getting stabbed and nuns getting crucified. Unfortunatly it's all downhill after that and the rest of the picture is merely average. 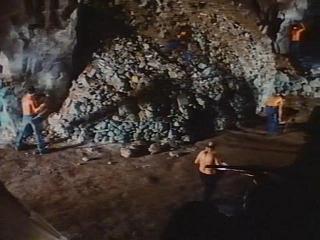 There's a 10 to 15 minute stretch of this movie that takes place in this mine. It has no baring on the story and is never mentioned again after our heroes escape it.

This movies' not god-awful though. It's only 86 minutes long, there's a lot of action and there was nothing about this movie that made me angry. Honestly though that's another knock against it. It's one thing to be a bad movie, it's another to be a mediocre movie. In conclusion, you're not missing much if you don't watch it but you're not going to be miserable if you decide to check it out. God I really wish this review wasn't as short as it is but 2020 Texas Gladiators didn't give me much material to work with. I literally only picked this movie because it happened to take place this year. Sorry.

You know, all of this leaves me with 1 burning question: If I end this with "Happy New Year" would it be too late or too early? 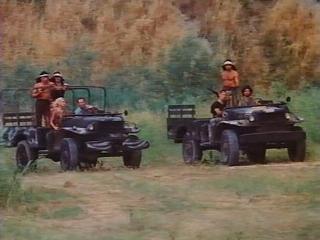 If these guys are Native American than I'm the emperor of Japan.